The hip joint is a weight bearing joint and thus is subject to large biomechanical forces, especially during sport and exercise.

From the outset, the weight-bearing function of the hip joint means it will be less flexible than say, the shoulder joint, yet more stable. There is always this trade-off in joints between strength and flexibility.

People often complain of tight hips. From the patients perspective this might be due to one or a combination of hip pain, reduced range of motion (for example during squatting), or perhaps uncomfortable clicking in the hips. For the treating practitioner, however, what does this actually mean?

The most obvious reasoning for a person complaining of tight hips would be due to a shortened state of the hip musculature (tight muscles).

Examples include: bending forward reduced because of tight hamstrings and gluteals; restricted thigh abduction due to tight thigh adductors on the same leg; or reduced hip extension because of tight hip flexors.

What is more difficult for the patient to perceive on their own however, is the possibility that their hip range of motion may first be limited by the ligaments binding the bones of the hip joint or the very shape of the bones themselves.

It is much easier for the patient whom has little understanding of joint anatomy to assume their condition is related to superficial structures (the muscles). What most people do not realise however, is that hip range of motion is first determined by the shape of the bones of your pelvis and your thigh bone, specifically the femoral head and the acetabulum.

In short, because of anatomical variations of the hip joint, some people will always be more flexible at the hips compared to the next person, regardless of how much stretching, exercise or mobilisation they receive.

Here is a great article that covers this in greater detail Why people have to squat differently.

The second determinant of hip range of motion is the joint capsule.

The joint capsule is formed by the major ligaments of the hip joint. These ligaments serve to fasten the femoral head securely to the inside the acetabulum. The muscles then overlie this capsule and contract in various sequences to bring about movement. As the capsule is so tightly adhered to the surface of the bones of the hip joint, any tightness within the joint capsule will limit range of motion before that of the muscles.

Unfortunately, there is little to nothing one can do to alter the shape of the bones forming their hip joint. In extreme circumstances, hip replacements are carried out where the hip has become biomechanically unsound due to degenerative change. One would be severely misinformed to consider opting for surgery to alter the shape of their hip articulations – if it ain’t broke, don’t fix it!

Tight hip capsules are likely in those individuals who perform repetitive tasks throughout the week.

Similarly, people seldom have much reason to squat these days. In western society, we have chosen to sit during activities which once saw us squat such as eating meals, desk work or even going to the toilet. This lack of folding our bodies to the ground sees a general tightening of the posterior hip capsule, not to mention the capsules of other joints too. Again, the muscles overlying these joints ultimately become tight as well.

WHAT SHOULD I DO IF I EXPERIENCE HIP PAIN?

The following exercises are taken from a chapter on hip flexibility out of H. David Coulters book, “The Anatomy of Hatha Yoga”. These exercises begin with very basic movements of the hip joints and steadily progress to more advanced stretching postures. The exercises explore all possible movements at the hip joint. Never stretch into pain, stretch to the border of pain then try gradual try to extend this border through regular practice. When you are not performing these exercises, attempt to spare a thought for the movements occurring at your hips throughout your normal day. Treat your body from time to time by squatting more regularly, doing exaggerated breast stroke kicking movements, running or just plain moving – your body will thank you. 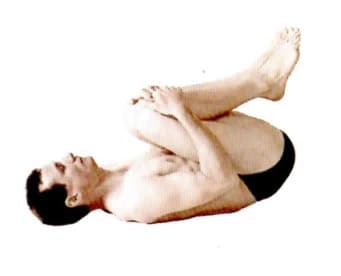 Posture 1. With the knees together, pull them toward the chest with interlocking hands and fingers, at the same time prying the pelvis away from the floor. 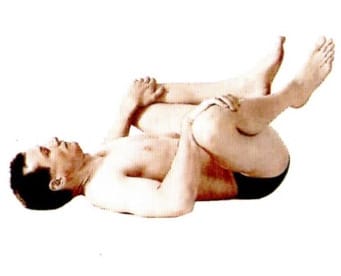 Posture 2. With the knees apart, pull on them from the sides with the hands, providing a slight stretch for the adductors. 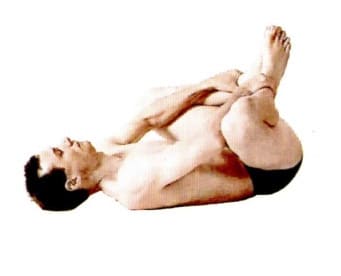 Posture 3. Grasp the knees from the inside and pull them down and laterally for more stretch of the adductors. 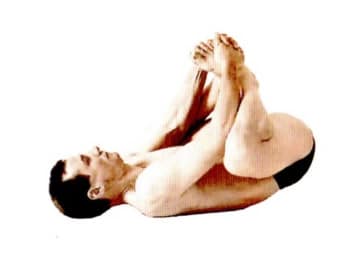 Posture 4. Grasp the ankles and pull the feet toward the head, pressing the elbows sharply against the thigh muscles. This tends to lift the shoulders, and you may want to have a pillow to support your head. 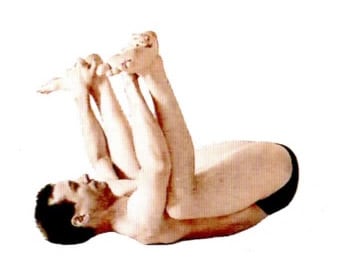 Posture 5. Grasp the lateral aspects of the feet and pull them toward the head, against the calf muscles. This provides the fullest stretch for the adductors in this series. 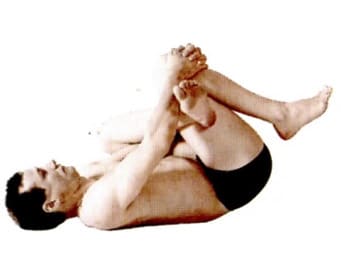 Posture 6. Grasp the soles of the feet from their medial borders and pull the knees toward the floor on either side of the chest. Be careful, because the arms can pull more powerfully than is temperate for the hip joints. 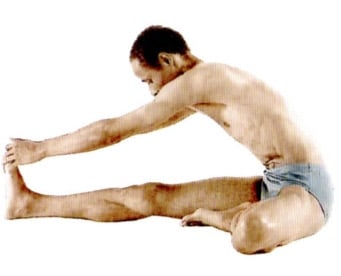 Posture 7A. Supine half-lotus hip opener – bring the left ankle to the near side of the right knee, resting the ankle against the thigh and pressing the left knee away from the body. Pass the left hand into the triangle formed by the two thighs and the left leg, lift the right foot off the floor, and grasp the right shin with the left hand just below the knee. 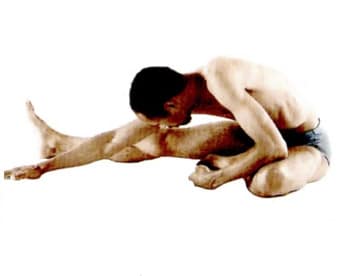 Posture 7B. Pull the left foot down closer to the pelvis with the right hand, place the right forearm above the left ankle, and interlock the fingers around the right shin just below the knee. 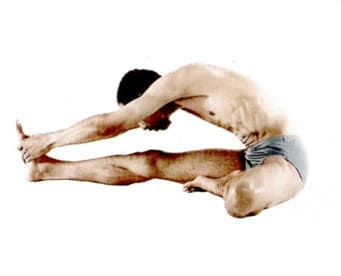 Posture 8. With the left foot placed against the thigh, come forward in an initial trial to feel and evaluate hamstring tightness.

Posture 9. Pressing the left forearm against the left knee, reach out at various angles (in this case 20 degrees) to stretch the adductors on the right side. 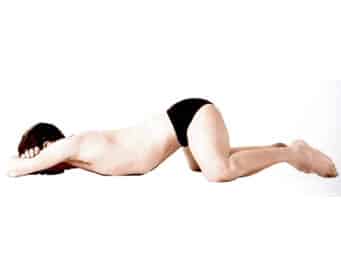 Posture 10. Notice the improvement. This is due to having lengthened the adductors, some of which have a hamstring character and which limit the forward bend for the same reasons as the true hamstrings. 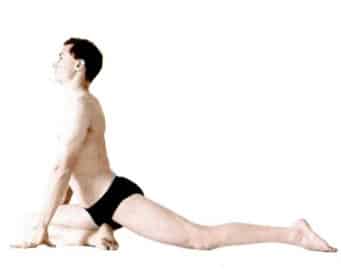 Posture 11A. The kneeling adductor stretch – start on all fours with your head resting into your crossed forearms. Slowly slide the knees apart, letting the feet move to whatever position is most comfortable as the body weight abducts your flexed thighs, possibly to an angle of about 120 degrees from another.

Posture 11B. Stay here for a while. Yu can then move the torso forward slowly. This may permit you to slide the knees further apart. Then slide the knees closer together again but sink into your hips a little deeper creating more flexion, you will be stretching different parts of the adductors than when you bring your weight forward. 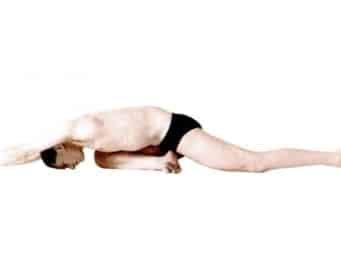 Posture 12. Preliminary pigeon – start on your hands and knees and pull the right foot forward to flex the right hip joint, and thrust the left foot back to extend the left hip joint. Allow the right foot to end up wherever it naturally falls. Keep the elbows extended and the shoulders pressing the hands against the floor. Pull the hard up and back, thrust the chest forward and feel the essence of the pose. 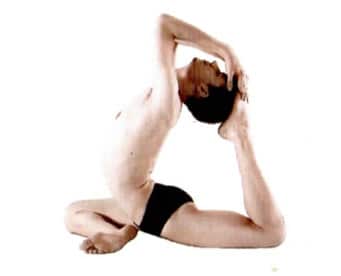 Posture 13. Folding into a forward bend from the previous posture is a comfortable and richly rewarding posture. The pose increase flexion of the right thigh and lessens hyperextension of the left thigh. 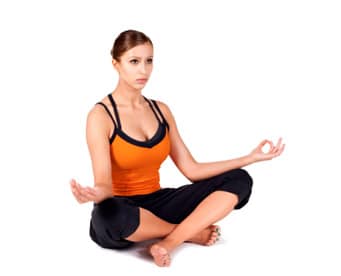 Posture 14. And if you’re really game

The above postures, or hip stretches if you like, give a very comprehensive mobilisation routine for all degrees of freedom at the hip joints. Practice these regularly and with caution, and you will likely reduce any hip pain and certainly maintain, if not increase, range of motion at the hip joint.

*DISCLAIMER: This discussion does not provide medical advice. The information, including but not limited to, text, graphics, images and other material contained in this discussion are for informational purposes only. The purpose of this discussion is to promote broad consumer understanding and knowledge of various health topics. It is not intended to be a substitute for professional medical advice, diagnosis or treatment. Always seek the advice of your physician or other qualified health care provider with any questions you may have regarding a medical condition or treatment and before undertaking a new health care regimen, and never disregard professional medical advice or delay in seeking it because of something you have read in this blog.