What is elbow pain?

Pain on the outside of the elbow joint, specifically at the lateral epicondyle of the humerus bone, where your forearm extensor muscles attach. Not to be confused with medial epicondylitis (Golfer’s elbow).

What can cause elbow pain?

Any activity involving repetitive motions of the wrist that simultaneously requires constant gripping or squeezing.

Examples include racket sports or golf, hedge clipping, excessive use of a hammer or screwdriver, etc.

Tennis elbow pain results through a process known as cyclic stressing. Cyclic stressing is how you break a coat hanger by bending it back and forth. Eventually, with enough stress cycles the tissues would rupture, even without any tremendous force. Rupturing these tendons is extremely rare however, usually micro-tears form in the tendons from all the aggravation. In turn, the area becomes inflamed as part of the natural healing process which can be painful.

Typically, people do not understand the mechanism of injury nor the healing process required for such a condition. They then return to doing the same activity that incurred the injury. As a result, the injury becomes chronic and never heals properly.

Poor technique is frequently accused. Whilst there are certain stroke technique tips you can employ to help reduce the stress on your forearm extensor muscles, the real cause is to do with your racket and how it impacts the elbow joint complex.

When you swing your racket at the ball, it travels at a certain speed. On impact, there is a sudden deceleration of the racket as it collides with the ball. During this collision there is also a reflex shortening of the forearm extensor muscles. These muscles continue to contract so as not to let go of the racket handle, so it suddenly shortens and yanks on the tendons that attach it to the elbow. This yank is a cyclic stress which if repeated over time, may be a contributing cause to tissue failure.

Impact with the ball twists the racket head backwards in relation to the direction you are trying to hit the ball. The resultant twist of the handle (a torque force) is clockwise for a right-handed forehand. This twist winds up a catapult. When the ball leaves the racquet, the catapulting force is counterclockwise for the right-handed forehand. The final effect is two opposite twisting forces experienced in an extremely short time interval during impact with the ball. Even for a dead-center hit, these consecutive forces create a severe stress cycle to the extensor carpi radialis brevis muscle, the muscle that attaches the middle of the hand to the elbow.

During impact, this muscle is either straining on the backhand, or slack on the forehand. On the backhand, the first twist yanks this straining muscle, further stressing the tissues attaching it to the elbow. Then the muscle suddenly loses resistance but continues to work against the combined stress, so it suddenly shortens after impact, giving an even more severe yank to the elbow. For the forehand, the muscle is slack on impact, so the catapulting stress cycle cracks the muscle like a whip, stressing the points of attachment at the wrist and elbow. Elbow straps can help because they damp this whip effect.

The shock from impact becomes internal energy, which is felt as frame vibration. This vibration is transmitted to the arm holding the racquet unless it is damped somehow. Vibration disappears quickly in wooden rackets because it is damped by the flex of the wood. The stiffer and lighter frames of today do a poor job of damping, thus they efficiently transfer the vibration to the arm. Undamped high frequency frame vibration can stealthily sabotage the elbow, so the price of power may be pain. Vibration of the frame is another form of cyclic stressing on the extensor carpi radialis brevis muscle.

What are the risk factors for tennis elbow?

Light racket weight – momentum is what counts in a collision (momentum = mass x velocity). A light racket won’t plough through the ball, instead it will bounce off, making it less comfortable on impact and less accurate. Light rackets can’t put much pace on the ball if you don’t have time to develop a long stroke, such as when you”re stretched out wide.

Head-heavy balance (balance point further from the hand than the midpoint of the racket’s length) – has significantly higher resultant twisting forces from impact.

Stiff frames (thick beam width) – unsafe because they absorb minimal twist (torque) from impact, with the energy transmitted directly to your arm instead of going into bending the frame material. 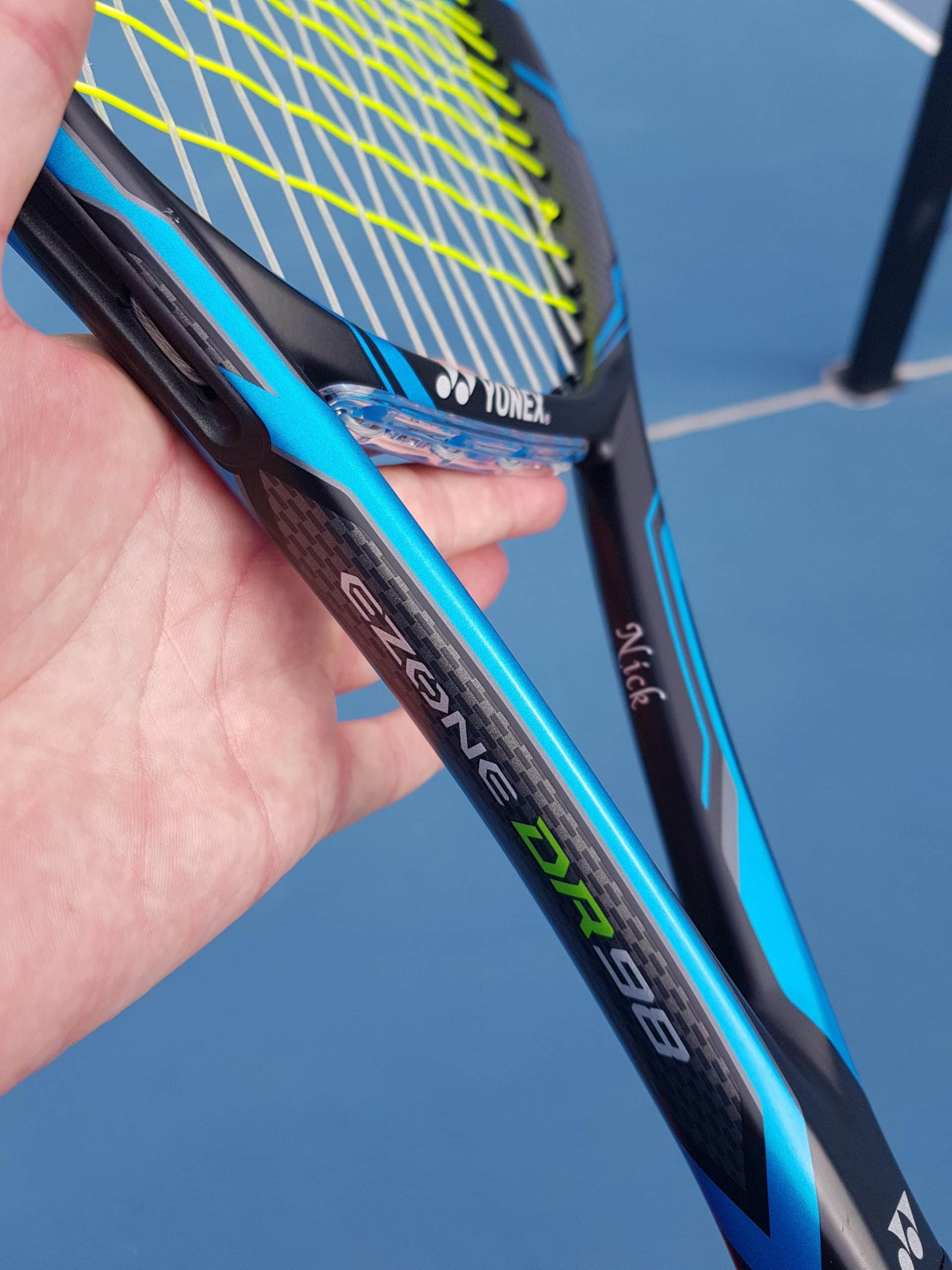 WHAT SHOULD I DO IF I EXPERIENCE ELBOW PAIN?

Remember, tennis elbow is not an injury caused by one defining incident, it is a repetitive strain type injury. These injuries develop over a long time, and thus take a long time to fix. It is the frequency of a certain activity rather than the tools used to perform it that leads to pain and is therefore more likely to affect regular players. The racket choosing criteria is merely consideration for the individual looking to modify their racket as a means to reduce risk of injury. In other words, try to avoid giving your five year old prodigy a 400g racket.

If you’ve noticed elbow pain recently or suspect you might be developing tennis elbow, see someone about it. Tennis elbow requires early treatment to the relevant soft tissues and if left for too long, may give rise to problems elsewhere such as in your shoulder. It will not go away by itself nor is rest alone sufficient treatment!

*DISCLAIMER: This discussion does not provide medical advice. The information, including but not limited to, text, graphics, images and other material contained in this discussion are for informational purposes only. The purpose of this discussion is to promote broad consumer understanding and knowledge of various health topics. It is not intended to be a substitute for professional medical advice, diagnosis or treatment. Always seek the advice of your physician or other qualified health care provider with any questions you may have regarding a medical condition or treatment and before undertaking a new health care regimen, and never disregard professional medical advice or delay in seeking it because of something you have read in this blog.